Skip to content
Call us 0345 314 2044
Contact Us
Home > Business > Tribunal Clarifies When Employee Negotiations Are ‘Protected Conversations’ Or ‘Without Prejudice’, And Therefore Confidential
We look at:

Tribunal Clarifies When Employee Negotiations Are ‘Protected Conversations’ Or ‘Without Prejudice’, And Therefore Confidential 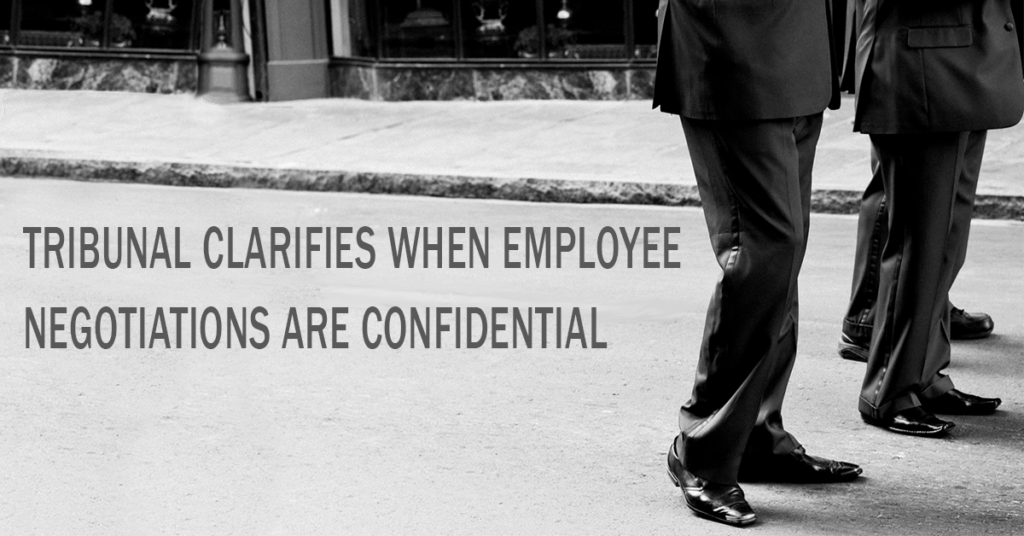 Employers facing claims from employees should understand when ‘without prejudice‘ and/or ‘protected conversation’ rules apply to negotiations between them, and conduct those negotiations accordingly, or risk their statements being raised subsequently in court to their detriment.

In this case, correspondence between them was marked ‘without prejudice‘. The law says that in a dispute or potential dispute of any kind, statements made orally or in a document with a genuine view to settlement are ‘without prejudice‘ – meaning they cannot later be used in court – for example, as an admission of liability. Without the rule, parties would be nervous about making admissions and/or reasonable offers to settle in case it prejudiced them later.

An employer and employee are also permitted in law to have ‘protected conversations’ about the possibility of the employee leaving, and the terms upon which they might do so, without the employer being able to refer to those conversations if they subsequently claim unfair dismissal.

The employee started a grievance in which she referred to the without prejudice settlement negotiations. She later claimed constructive unfair dismissal and indirect sex discrimination. Her claim was, in part, based on the firm’s behaviour towards her during negotiations.

Useful points from the EAT ruling include:

The EAT made the specific point that parties could not rely on court decisions about the without prejudice rules to interpret the protected conversation rules. The two were entirely separate. This meant that evidence of negotiations might sometimes be admissible for an unfair dismissal claim but not any other claims, and vice versa.

In this case the employee was held to have waived her right to without prejudice protection, but could not have done so in relation to the protected conversation rules as waiving those rules was not allowed.

The issue of whether the protected conversation rules did not apply because there had been improper behaviour was sent back to the Employment Tribunal to be re-considered.

• Employers facing unfair dismissal and other claims from employees should ensure they know whether the ‘without prejudice‘ and/or ‘protected conversation’ rules (and exceptions) apply to negotiations between them, and conduct those negotiations accordingly. Otherwise, they risk what they say being raised subsequently in court, to their detriment